An example of this is the jealousy of women, especially m the case of co-wives, some of whom may make mistakes that, if they were made by anyone else under normal circumstances, would be treated quite differently. The Prophet (SAW) used to pay special attention to the issue of jealousy among his wives and the mistakes that were made by them as a result, and the patience, justice and fairness with which he handled the matter are plain to see. An example of this is the report narrated by Bnkhan in his Saheeh from Anas (RA), who said: “The Prophet (SAW) was with one of his wives when another of the Mothers of the Believers (Prophet’s wives) sent a big vessel full of food to him. The wife in whose house the Prophet (SAW) was struck the hand of the servant, and the vessel fell and broke into two pieces. The Prophet (SAW) picked up the pieces and put them together, then he gathered up the food that had been in the vessel and said, ‘Your mother is jealous.’ Then he asked the servant to wait and gave him a whole vessel belonging to the wife in whose house he was, and kept the broken vessel in the house of the one who had broken it”158
According to a report narrated by an-Nasa’i (Kitab 'hhmt an-Ntsa j. Umm Salamah brought some food in a vessel belonging to her to the Messenger of Allah and his Companions, then ‘A’ishah came wrapped in a garment, carrying a stone, which she threw and broke the vessel. The Prophet (SAW) put the two halves back together and said, “Eat, your mother is jealous” he said it twice, then he took ‘A’ishah’s vessel
and sent it to Uinm Salamah, and gave Umm Salamah’s vessel to ‘A’ishah.
According to a report narrated by ad-Darimi (Kitab al- Buyoo Bab man kasara shay’an fa 'alayhi mithluhu) from Anas he said: “One of the wives of prophet (SAW)sent him a vessel in which was some thareed (a dish of sopped bread, meat and broth), when he was in the house of one of his other wives who struck the vessel and broke it. The Prophet (0J started to pick up the thareed and put it back into the broken vessel, saying, ‘Eat, your mother is jealous...’ ”
Women's jealousy is an inherent part of their nature that may cause them to do bad things and prevent them from seeing the consequences. It is said that when a woman is jealous, she cannot sec the bottom of a valley from its top.

Conclusion
Following this exploration of the Sunnah and the methods which the Prophet (*SAW) used in dealing with people’s mistakes, we should conclude by mentioning the following points:
—            Correcting mistakes is obligatory and very important. It is part of an-naseehah (giving sincere advice) and forbidding what is evil, but it should be remembered that Islam is not only about forbidding what is evil; we are also commanded to enjoin what is good.
—            Education and training are not merely the matter of correcting mistakes. They also involve teaching and showing the basic principles of religion and the rules of skaree ‘ak, and using various methods to establish these concepts firmly in people’s minds and hearts, by example, exhorting them, telling stories, or by discussing incidents, etc. From this, it is elear that some parents and teachers are falling short by confining their efforts only to addressing mistakes without paying due attention to teaching the basics or dealing with mistakes before they happen by instilling that which will protect people from committing mistakes in the first place, or at least reduce their impact.
—            It is clear from the incidents and stories mentioned above that the Prophet (SAW) used different approaches in dealing with different mistakes. This is because circumstances and personalities vary. Whoever understands this and wants to follow suit must compare the situation he is dealing with to these examples to find the one that most closely resembles it, so that he can determine the most appropriate approach to use.
We ask Allah, may He be Glorified and Exalted, to guide us and protect us, to make us openers of the doors of good and closers of those of evil, and to guide others through us, for He is the All-Hearing, the Ever-Near, Who answers prayers. He is the Best of supporters and the Best of helpers, and He is the Guide to the Straight Path. May Allah bless the unlettered Prophet (SAW), all his family and Companions and Praise be to Allah, the Lord of the Worlds.
Posted by Anonymous at 3:30 PM No comments:

Astronomy
Need for Astronomical Science
- Travel for Trade Find direction of Makkah
- Building Mosques
- Star Maps
- Astrolabes Building of Observatories
- Celestial Motions
- Geodetic Measurements
- Verification of Solar Year
- Astronomical Instruments
Arab developed interest  in study of stars and sky because as the dwellers of the desert who usually traveled at night in connection with trade, war and migration from one place to another, they found the direction of their journey with the help of the stars. The clear sky of the desert gave them a chance of making precise observations. Thus there was some locally acquired knowledge of the fixed stars, the movements of the planets and the changes of the weather. After the advent of Islam, the Muslims had to determine the time of the prayers and the direction of the Ka'abah. For this Muslims who once flourished in trade all over the world of launched Jihad, had to travel on the land and the sea. As an aid to travel, navigation and meteorology, a by-product of navigation, they needed star maps. The necessity of such maps also resulted in their interest in astronomy.
The regular study of astronomy and mathematic s was begun at Baghdad in the second half of the 8th century CE during the time of the second 'Abbasi Khaleefah al-Mansur, The investigations on astronomy continued. Nearly all of the original and creative work was done by Muslims. Astronomy reached its highest in the 13th and 14th centuries CEo In the 12th century CE, the Christians and Jews started the work of translation from Arabic into Latin and Hebrew, and began to conduct research in this field. But until the end of the 13th century CE, no mathematical and astronomical work comparable to that of the Muslims could be produced by the Christians or Jews. 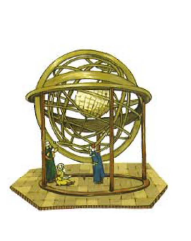 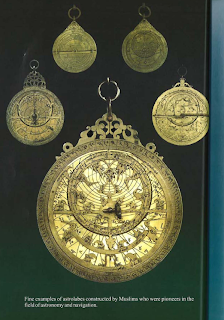 The Muslim astronomers also prepared the star maps to preserve the old astronomical knowledge and to use them as aid to travel navigation and meteorology. Astronomer
Ibrahim ibn Habib al-Fazari was the first Muslim who constructed astrolabes . He composed a poem on astrology, and compiled a (calendar) according to the Arab method. He also wrote on the use of astrolabes and on the armillary spheres.
During the time of Khaleefah al-Ma'mun the important work of translation of Ptolemy's Almagest from Greek into Arabic was completed: Khaleefah al-Ma 'rnun (786 - 833 CE) built an observatory In Baghdad in his Bayt al-Hikmah and another in the plains of Tadmor".
More original and improved work was done in the second half of the 10th century CEo The elaboration of trigonometry, arch was considered to be a branch of astronomy at that time , was  also continued. Great attention was paid to the construction of good astronomical instruments, especially to the spherical astrolabe which was newly introduced at that time. Hamid ibn 'Ali and 'Abdullah Muhammad ibn Jabir ibn Sinan al-Battani were famous makers of astrolabes
Posted by Anonymous at 2:02 PM No comments: