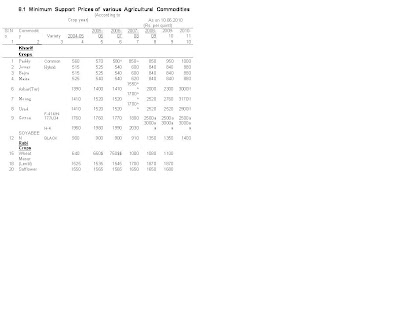 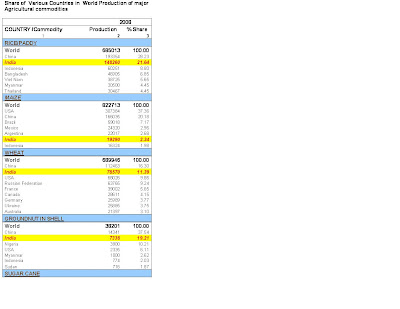 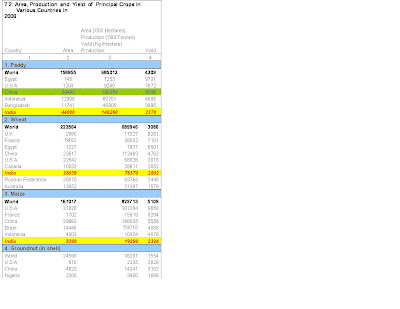 The onion price has gone from Rs. 80 to Rs 2 a Kg in last 45 days. What a great achievement! Great work my dear Prime Minister!!! Please check your hands!!!
I thinks it has blood……..it has blood of those poor farmers who are asking for fair play. They are asking for life not death.

IIT and IIM are increased, doubled over the years and especially in last ten years. I have just one question how many more agriculture universities and colleges do we have started in last ten years. India’s biggest sector is neglected and neglected too much; the sector which gives employment to 70% of India is no where in development and growth.

We need IIT and IIM ….yes…….I am not disagreeing on it but more importantly we need many more agriculture colleges and universities to educate those who are dying because of lack of knowledge on how to do the job they are doing.


Mr. Dr. Prime Minister ...............( PhD is Capitalist Economy) Yes you have yet to complete a job! As you said you have job to be completed ……….……… …poor are starving. You are making them starve. You have Job to be completed of converting India’s economy run by 12% so rich become richer and poor become poorer. This is what exactly you are doing with your policies.

Onion Rs. 60 to Rs 80 a Kilogram and all vegetables are skyrocketing in the market. The prices of the food items, especially basic food staple has increased almost 50% in last one year and if we look at basket of basic food needs of an average family it has doubled in last two years. Officially inflation stood around 18% YonY at end of December over last year. Global food prices has gone 25% (FAO) food index YonY and pulses has risen 39% YonY. This is the situation, India the biggest producer of pulses and milk has very bad year. Unfortunately PM says because poor people has more disposable income so they are spending more and result is price rise. But with all logic and his credential as economist and as RBI governor I failed to understand, how increase in income of middle class, or poor people will affect prices so much. Are they storing too much? Are they eating too much? They must be spoiling too much!! Unfortunately their income has not gone up that much, and whose income has gone up, the real middle class will spend it on vehicles, cars and tourism, night clubs, most importantly Liquor. India has one of the fasted growth in liquor sell, government should think of increasing taxes on this and associated product which will burden India’s healthcare system in long term. But no one can eat more than his belly, still we are poor country can not spoil food. Even today when I go to any of the home (well to do) I have not seen any one throwing yesterdays food in dustbin. Most of them eat after making it something different product or same by heating. If not, for more than a days old, they will give to maid (she will take it happily and enjoy it, never throw it.). We have more than enough destitute who come asking for food everyday, they too like to take old food. This logic of increase in income is cause of price rise does not hold good. Economist are good in numbers and interpreting it differently as they like, we need to see price parity basis also, and definitely our statistical bureau can give any number, also can prove that income has increase. I am agreeing to income has increased, but one must accept, poverty, and disparity in income has also increase and I can prove it with their numbers only. I am not in business of making numbers fortunately.

This means farmers must be making fortunes by selling onion, potato, milk and other vegetables. Their income must have been increased substantially in last decade. But Data talks differently, last year more than 17000 farmers committed suicide because of financial problems. In 2011 from January 1st till 15th, more than 11 farmers committed suicide in Vidarbha only. (PM has given big package for the development of Vidarbha farmers, which I failed to see on ground when he visited, that was election gimmick played very well………. We should have elections every 2 years instead of 5 years so people may get some thing regularly, one year assembly election and next year parliamentary election.)
Average Productivity of main crops and India’s Ranking in the world.
MSP for last five years
Minimum wages for last five years
Land holding pattern in India
Average income of farmer
Average monthly salary of Class IV employee of Government of India after 6th pay commission.


If we look at data below even though India has one of key player in agriculture its performance as agriculture producer has remain dismal. It is the old Green revolution which made India self sufficient in wheat and white revolution for milk. But disparities in states are wide. Production is bad and productivity is at mercy of mansoon. Unfortunately government’s allocation to the agriculture as percentage share of budget is going down continuously. The projects are still uncompleted after 20 years of executions.

The cost of production has gone up three time, average holding of land is going down and productivity and MSP are not increased so farmers are getting poorer.

This need change of attitude and focus on change of development. 12% growth will bring more deaths and more inflation and more food riots and disparity between rich and poor.
India needs 7% growth which is diversified across the sectors and in the villages.
Government must increase its allocation to agriculture and also in the research.

World has seen lot of things changing so fast and so dramatic in last one month that no one has imagined.

Revolution in Tunisia,,,,,,,,,, Egypt ………….and ……..many more are waiting. This will change the world may be for ever and diplomacy of the world.

Even though India is known for non violence movement ( Ahimsa) by Bapu but today even though it is high time India should change, but do we have leaders!

Leaders are born……………with revolution……….if we look at those who are around Baapu or around J P they are all young.

All are product of J P movement. They are young………and dedicated to the nation building………… fought and won.

One more J P movement is required to remove corruption from the society. The corrupt system needs a overall. “Change means Change”

A people government means peoples government, accountable to the people.

But it should not be change of face only.

Our P M in waiting is there L K Advani but he has a hard battle ahead and yes.

For all this “A Young Leader” with a dream of future India is required.

There are no place for Dynasties and Prince in this, only the one deserves will get it.

India of 22nd Century…….. Developed and peaceful and ethical co existence where no one is exploited and no one is oppressed.

Where there is no place for color, class, and caste........everyone is eligible unless declared ......clean , ethical, transparent and accountable.