Contributions of Muslims to Medicine

- Translation of Work from Other Languages

- Structure of the Eyes 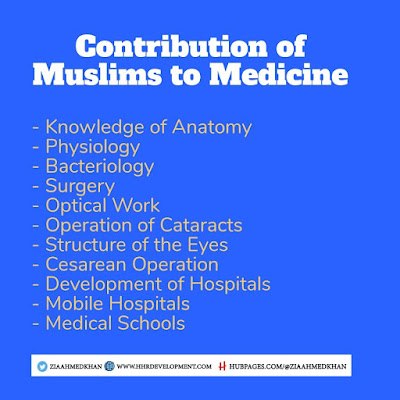 Centuries before the advent of Islam the Arabs had their own system of medicine in the form of herb and shrubs which was based on Chaldean medicine and on their own experience. Gradually Greek medicine attracted their attention. Harith ibn Kaldah was the first to introduce Greek medicine e to the Arabs. Khalid ibn Yazed ibn Mu'awiya had some Greek and Egyptian books translated into Arabic during the 'Umayyah period. But the science of medicine flourished during the time of the Abbasids.

Initially, the Muslims made arrangements for the translation of Greek, Indian, Persian and Chaldean medical works into Arabic, and thus received their knowledge of medicine from these nations. Before they accepted at face value the information they extracted, they conducted research in various branches in medicine to verify what they gathered from these texts.

In addition, they made many valuable new discoveries in medical theory and practical. By combining their discoveries, with the information they filtered from other sources they evolved an entirely new system of medicine.

The Arabs had a fair knowledge of anatomy as it is obvious from the names of the internal and external organs of the human and animal bodies found in the literature of pre-Islamic Arabia. When they became acquainted with the Greek anatomical descriptions, they made investigations on them, pointed out many errors in the work of their predecessors, and made many new discoveries in this field.

In order to verily the Greek anatomical ideas prevailing at that time, Yuhanna ibn Masawaih made dissections of apes supplied to him by the order of the 'Abbasi Khaleefah Mu'tasim Billah. After this verification he composed his work on anatomy. The works of some Muslim physicians and surgeons, like Tashrili al-Mansuri by Mansur ibn Muhammad, contain illustrations of human organs, which are not found in the Greek works. These illustrations also throw light on the Muslims' practical knowledge of anatomy.

In the field of physiology the work of the Muslim physicians is quite valuable. For instance, Ala al-Din Abu al-Hassan 'Ali ibn Abi Hazm al Qarshi of Damascus explained the theory of the minor circulation of blood three centuries before William Harvey, who is credited with this discovery. Also, al-Qarshi suggested that food is fuel for the maintenance of the body's heat. Abu al-Faraj 'Ali ibn al-Hussein held that there are canals in the nerves through which sensations and movement are transmitted.

The contributions of Muslims in the field of bacteriology are quite revolutionary. According to Browne, Muslims were fully aware of the theory of germs. Ibn Sina was the first to state that bodily secretions are contaminated by foul foreign earthly bodies before getting the infection. Ibn Khatimah of the 14th century CE stated that man is surrounded by minute bodies which enter the human body and cause disease. His observation was made from the great plague that effected many parts of the world. Ibn al-Khatib (1313 - 1375 CE), a Spanish physician, wrote a treatise called On the Plague. His observation was:


"The existence of contagion is established by experience, investigation, the evidence of the senses and trustworthy reports. These facts constitute a sound argument. The fact of infection becomes clear to the investigator who notices how he who establishes contact with the afflicted gets the disease, whereas he who is not in contact remains safe, and how transmission is affected through garments, vessels and earrings."

Some Muslims also gave new suggestions regarding the treatment of diseases. Abu ai-Hassan, the physician of'Adud al-Dawlah" introduced the process of bleeding as a treatment of cerebral hemorrhage which is often due to blood pressure.

Al-Razi suggested nourishing food for the treatment of general weakness. The Muslim physicians were the first to use the stomach tube for the performance of gastric lavage in the case of gas poisoning. They were fully aware of the principles of phototherapy centuries before Browne Sequard, who is ascribed to discovering this method of treatment.

In the science of surgery there were also many advancements made by Muslims. They introduced the cauterizing agents in surgery. They were the first to apply the method of cooling to stop the hemorrhage, and suture wounds with silken threads.

It cannot go unnoticed that one of the most famous and eminent figure in Islamic medical field was Ibn Sina. It is said that for a thousand years he has retained his original renown as one of the greatest thinkers and medical scholars in history, His most important medical works are the Qanun (Canon) and a treatise on cardiac drugs.

In the 11th century CE Ibn Zuhr gave a complete description of the operation of tracheotomy, which was not mentioned by the Greeks. Abu al-Qasim al-Zahrawi invented many surgical instruments illustrated in his book Al- Tasrif. In the same book he described the methods of operations for various diseases. While describing the operations of the skull and its parts, the Muslim surgeons made a mention of operations of the uvula and nasal cavity. They also used methods of tonsillectomy and paracentesis ofthe ear drum.

The Muslim opticians did valuable and original work in the treatment of eye diseases and surgery. Many of the surgical principles formulated by Muslims are still utilized today. The method of operation of cataracts was first described by them. They knew that cataracts were due to the incapacity of the eye lens. Ibn al Haytham described the structure of the eye and gave revolutionary ideas regarding the mechanism of sight and describing various types of lenses.

The art of midwifery was highly developed by Muslims. Abu al-Qasim al-Zahrawi invented the method of cranicolsy for the delivery of dead fetus and applied it himself. A book entitled AI-Athar al-Baqiyyah in the University of Edinburgh contains an illustration showing an Arab physician performing cesarean operation.

During the time of'Umayyah rule, the Muslims developed the institution Of hospitals. During the time of the 'Abbasi Khaleefah Harun aI-Rasheed a hospital was built in Baghdad, which was the first in the history of this city. Many new hospitals were established shortly afterwards. Some of them had their own gardens in which the medicinal plants were Cultivated. The large hospitals had medical schools attached to them. Besides such hospital there were a large number of mobile hospitals in the Muslim world.

The Muslim hospitals served as models for the hospitals established in different parts of Europe, particularly in Italy and France during the 14th century CE due to the influence of the Crusades. The Crusaders were inspired by the magnificent hospitals of the Seljuq ruler Nur al-Dir, in Damascus and those of the Mamluk Sultan aI-Mansur Qala'un in Cairo.