Islam is a system of life that originated from the Allah, the Creator. Allah is the One who created man, life, and the universe and subjected man to the physical laws that He imposed on the universe. The Qur'an, as revealed to Muhammad SAW, directs man to think and study the physical world in order to understand the reality and to appreciate more the greatness of the Creator.

Many verses in the Qur'an point to the physical world and explain natural phenomena, as a confirmation for humanity that this revelation came from the Creator. Some of these explanations could not be understood at the time of the revelation because mankind did not have the tools that are taken for granted in modem times, such as the microscope, X-rays and so on.  lt is only during the last hundred years that some of these explanations became understood as a result of advances in Science.

The examples in the Qur'an are many and range from the creation of the universe down to the fertilization of the egg by the sperm. It will suffice here just to quote few of these verses. 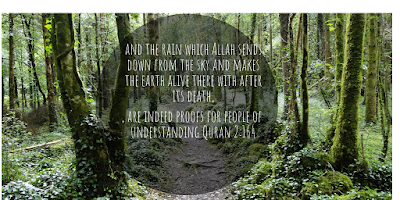 "Verily! In the creation of the heavens and the earth, and in the alternation of night and day, and the ships which sail through the sea with that which is of use to mankind, and the rain which Allah sends down from the sky and makes the earth alive there with after its death, and the moving (living) creatures of all kinds that He scatters therein, and in the veering of winds and clouds which are held between the sky and the earth, are indeed proofs for people of understanding." [Translation of the meaning of the Qur'an, 2: 164]

"Verily, in cattle there is a lesson for you. We give you to drink of what is inside their bodies, coming from a conjunction between the contents of the intestines and blood, a milk pure and pleasant for those who drink it. "[Translation of the meaning of the Qur'an, 16:66]

"Do you not see that Allah has made subservient to you what so ever is in the earth, and the ships that sail through the sea by His command? He with holds the heaven from falling on the earth except by His Leave. Verily, Allah is. for mankind. full of Kindness, Most Merciful.  [Translation of the meaning of the Qur'an, 22:65]

"Then We placed him as (a drop) sperm in a place of rest, firmly fixed. Then we made the sperm into a thing which clings (to the womb), then of that thing We made a (fetus) lump, then We made out of that lump, bones and clothed the bones with flesh, then We developed out of it another creature. So blessed be Allah, the perfect Creator. "[Translation of the meaning of the Qur 'an, 23: 13-14] 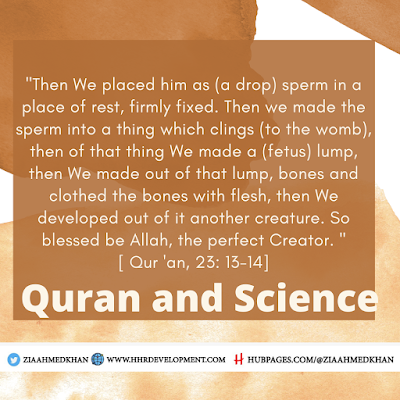 Although Qur'an points to the physical world to make people think, and it encourages people to discover physical laws, the Qur'an is not a book of science. Rather, it came to organize human relationships with the self, with other humans, with the Creator, and with the surroundings. Islamic law therefore deals with the proper use of scientific facts and not with their discovery. For example, Islam does not prevent people from designing a space craft or a laser gun, but it does lay down principles for their use.

Evidence that Islam does not interfere with scientific discovery can be seen from an incident that took place during the time of the Messenger of Allah , who once suggested to farmers that it might be better if they left palm date trees without cross-pollinating them as they did every year. The following year, farmers complained that the trees did not produce normal yield, so the Messenger of Allah said, "You know the affairs Of your world better." This means that this advice was not from Islamic text; rather it was a personal opinion of the Messenger of Allah (saw) as a man. Thus, people were left to their own scientific discovery and applications.

Also, there are no records in history to show that the Islamic Government, its scholars or learned people ever gave Islamic rulings on scientific matters, unlike the Church in Europe, which interfered with scientific discovery. In fact, many of the leading scientists were also Islamic scholars, and they did not see any contradiction between science and Islam. However, few scientists went beyond their subject matters and propagated incorrect ideas about Islamic belief, for which they were rebuked and corrected but not tortured or persecuted. There is, therefore, no contradiction between Islam and science. 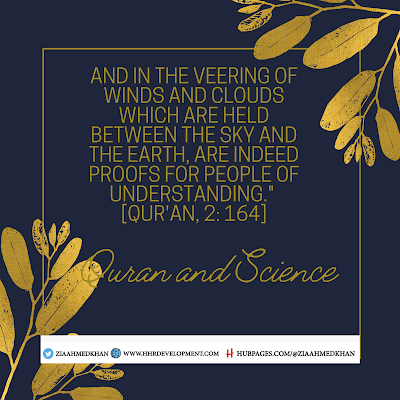