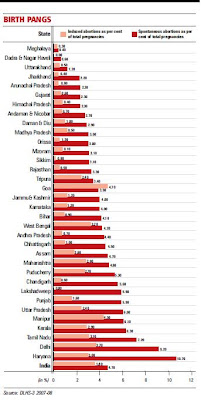 The sorry state of maternal care in India has come to the media attention once again. A recent Lancet study noted that India has the highest number of stillbirths in the world, accounting for a little under a quarter of the global total.

Significantly, the study pointed out that around 45 per cent of these can be prevented by timely medical attention. The District Level Household Survey (DLHS) conducted in 2002-04 estimated that stillbirths occurred in 1.7 per cent of all pregnancies for currently married women in the age group of 15 to 44 years in the three years preceding the survey.

In the next round, DLHS-3 for 2007-08 estimated stillbirths at 1.3 per cent of all pregnancies. However, as the survey respondents were in the age group of 15 to 49 years, the estimates of the two rounds are not strictly comparable.

In six states – Bihar, Haryana, Karnataka, Uttar Pradesh, Chhattisgarh and West Bengal – the share of stillbirths to total pregnancies exceeded 1.7 per cent. And in Delhi, Mizoram, Himachal Pradesh, Lakshadweep and Goa the share was 0.5 per cent or less.

It goes without saying that pregnancies that do not culminate in live births take a toll on the physical and psychological health of women. Also the limited access to safe health care from qualified health professionals creates more risks. According to the Family Welfare Statistics 2009 of the Ministry of Health and Family Welfare, abortions were responsible for eight per cent of maternal deaths between 2001 and 2003, the latest period for which data are available. Timely and reliable health intervention – whether it is for safe contraceptive methods or during pregnancy – is vital for reducing the burden on women’s health in India.

Indian States Development Scorecard is a weekly feature by Indicus Analytics that focuses on the progress in India and the states across various socio-economic parameters India has the world’s highest number of stillbirths, with mothers-to-be lacking timely and reliable medical attention
Posted by Zia Ahmed at 9:55 AM